Male
Cat Bird is the adorable protagonist and player character of the game of the same name.

Certain items or environments may alter these rules. For instance, springs and diamonds both act as a second jump, and wind allows for theoretically infinite jump high.

In all official art, Cat Bird is depicted as a white creature with a cat's face, ears, and front paws, as well as white wings. In the OST album art, it is shown that Cat Bird's wings are feathered. It is unclear whether Cat Bird has hind legs as they are never shown in any piece of official art and the in-game sprite is too abstract to clearly tell.

Through unlocking skins, Cat Bird's color can be changed to either gold or black. 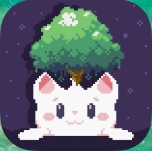 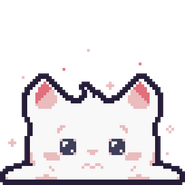 A picture of Cat Bird from the game's official studio

Cat Bird's idle flight animation
Add a photo to this gallery
Retrieved from "https://cat-bird.fandom.com/wiki/Cat_Bird?oldid=825"
Community content is available under CC-BY-SA unless otherwise noted.